At a time when the Bible is under attack by the world which is determined to dismiss the truth as fairy tales, a visit to Israel can strengthen your understanding of the Bible as a book of history and facts.

Jesus spoke of how the Gospel was to go out from Jerusalem, Judea and Samaria to the ends of the earth, and it is indeed in Jerusalem where some of the most pivotal events of the Bible take place.

After the death and resurrection of Jesus, the apostles walk around Jerusalem performing miracles and preaching the Gospel. After one sermon at Pentecost at Herod’s Temple in Jerusalem, we read in Acts 2 that three thousand people put their faith in Jesus and were baptised that same day. 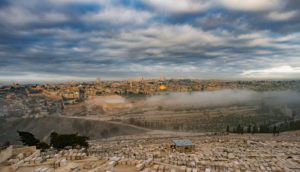 How was that possible? A recent discovery of hundreds of mikvehs – Jewish pools for ritual cleansing – by the old temple ruins in Jerusalem, shows that many people could be immersed simultaneously.

That’s not all – within a short walk you will arrive at the site of the pool of Siloam, where Jesus performed a healing miracle. If you’re feeling adventurous, you can take a trip to Hezekiah’s tunnels, which King Hezekiah constructed to divert water in order to protect the city from the Assyrian army in the 8th century BC – all detailed in the 2nd Book of Chronicles.

When you visit Israel, you can connect to the Torah through the famous site of Tel Shiloh – the major cultural centre of ancient Israel where the Tabernacle is thought to have been placed, according to Jewish tradition.

You can also travel to Bethlehem where Jesus was born, Jerusalem where Jesus taught the rabbis whose descendants still give the city its unique character, and then travel up to Nazareth in the Galilee, and spend time at the Sea of Galilee where Jesus walked on water (although we don’t recommend you try this!).

Heading up to Nazareth, you will pass the plains of Megiddo, where the Book of Revelation depicts the final battle of Armaggedon. Other places well worth a trip are Jericho in the West Bank; an unwalled city since Joshua triumphed with the trumpet blasts of Israel’s army thousands of years ago, and now famous for its palm trees. Nearby are the caves of Qumran, where the Dead Sea Scrolls were discovered by Bedouin shepherds seven decades ago, changing the face of Biblical scholarship by adding new depths to our understanding of the Hebrew Scriptures.

After having immersed yourself in modern Israeli life and connected to the stories of ancient Israel, you will never read the Bible in the same way again. Now each time you open the Scriptures, your mind will conjure up images of what you saw and how you felt whilst on holiday in the Holy Land.

Through Isra Home Tours, you can book up a trip to Israel easily today, with expert guides well-versed in both Old and New Testaments. Just don’t forget to bring your Bible!